The Globe. Burnt down, pulled down, but now it is back. Screech. The bus broke to a halt. London.

Post-tour we embarked on a dramatic journey of learning in an acting workshop led by the actor Simon. He shared his incredible knowledge and acting skills so we looked like experienced professionals after our session!

Next charismatic and knowledgeable history teacher Mr Kendrick led us on a fascinating tour around Southwark where we learnt about the establishments of deception and mischief run by the Bishop of Winchester. Some involving ‘geese’. Still host to the money making industry, we found the Financial Times sitting right on top of the site of the first Globe Theatre.

Nearby, we sampled the delicacies of London’s Borough Market. Treats such as hand-baked fudge, bowls of rice-laden fried pork, lettuce beetroot burgers for the vegetarians and rich curry for the brave were sampled. The smells were divine.

Finally the play – ‘The Comedy of Errors’ back at the Globe. Full of energy, the actors expertly demonstrated the power of the English language to implement the effects of comedy and confusion. 8 actors played 20 parts comically interacting with their audience to create an uplifting and raucous atmosphere. At times, it felt like we were acting alongside them on the stage as they played around towering, thick pillars holding up the heavens.

The trip reminded us of the power of the English language, how it shapes different emotions. It was a memorable day and one I would happily repeat to delve further into historical London and sample another play by the legend that is Shakespeare.

What an outstanding performance, truly unforgettable.

The historic adventure of the old town of Southwark was entertainingly shown by Mr Kendrick; a shame it was not longer. He showed us the Rose Theatre and the delightful bronze map of the formal side of the river and the fun, exhilarating side.

The experience of the acting workshop was interesting and engaging with our teacher who was one of the actors for the globe. She was very enthusiastic and this then caught on to us as her pupils. She took apart The Comedy of Errors and enhanced our understanding of the language and knowledge of the play. Because of this, it was more enjoyable and easier for us to understand later in the afternoon when we watched the play.

For lunch we explored the depths of Borough Market were we all had a different lunch from around the world. Overall an outstanding and exciting day out in London. 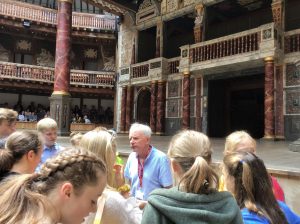