Town Close School has won the Pre-Prep / Prep school of the year award at the prestigious Tes Independent School Awards 2020.

The school dog and a gender-neutral uniform designed by the pupils were among the features that caught the judges’ attention in this category.

Bella the Australian labradoodle was recruited by the learning support department to provide comfort and support to children who may need it. And the uniform change, inspired by the Norwich-based school’s pupil-led council, is said to have had “a major impact on everyone’s tolerance and empathy”, as well as making “a huge difference” to a small number of pupils who felt out of place in their old uniform.

The school’s other achievements include its newly formed Formula 24 electric go-kart team, which was said to be the first ever team from Norfolk to qualify for the Greenpower International Final. A total of 40 pupils have so far attended races nationally and, behind the scenes, they have built and modified the car, while gaining hands-on engineering experience and benefiting from a fabulous context in which to learn teamwork. The project has also benefited hundreds of state pupils.

The school is set in a 15-acre wooded site in Norwich, where children have the space and freedom to play and explore. Every child has the opportunity to represent the school in sports fixtures (Year 4 upwards), participate in house matches and in swimming galas (Year 3 upwards), and all children take part in athletics sports days.

Meanwhile, every pupil from Years 1 to 8 had their artwork framed and exhibited in a biennial art exhibition, while numerous plays, concerts, house singing and the variety show give a platform for all to perform.

The school also won a computer coding competition at the University of East Anglia and was third internationally in the Vocab Express Challenge (piccolo category).

Headmaster, Nick Bevington said: “I am extremely proud that Town Close has won such a prestigious national award, recognising the achievement of our children and the huge success of a range of pupil-led initiatives. Our school is proof that children can achieve more than we would ever believe given the right values, inspiring teaching and space to discover themselves.” 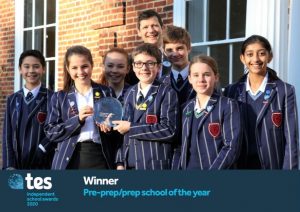