It is with great sadness that we share with you the news that Mr Bryan Read, after whom the School’s Read Hall is named, died peacefully at home at the age of 95 over half term.

The School owes a great deal to Bryan, who was a stalwart supporter of the establishment with which both he and his family have had a long association.  While keen to point out that he was not a founding pupil, Bryan started at Town Close House Preparatory School at some point during the academic year in which Mr Dearnaley set it up (1932-33).  From Town Close he moved to Bishop Stortford College and then to Cambridge University where he studied engineering.  His father owned a mill in Norwich and his mother was a member of the Colman family and so his heart lay firmly in the City to which he returned having worked in mills in England and Ireland.  He took over running the family’s flour mill on King Street in 1963.

In the meantime, Bryan’s sister Brenda was working at Town Close and when Mr Dearnaley was considering the School’s future, Bryan was one of those to whom he went for advice and assistance in changing it from being a privately owned enterprise to becoming a limited company and then a charitable trust in 1968.  Bryan became part of the first governing body, initially under the chairmanship of Viscount Mackintosh of Halifax, before being the obvious choice to succeed him in 1977.  He remained Chairman of Governors for over a quarter of a century.

Along with his fellow Governors, Bryan oversaw many significant changes to the School including: its substantial growth in numbers; becoming co-educational after more than 60 years as a boys-only school, and major improvements to its fabric and facilities.  He must have smiled when the outdoor pool, remembered by many an old boy for its chilly temperature and odd green colour, was filled in and replaced by today’s wonderful, indoor facility.  The Dearnaley Building is the most obvious, visible legacy of his leadership but many of Town Close’s buildings were either constructed or substantially remodelled in what might be called ‘the Read years’.  These included the original sports hall built in the 1970s which was later remodelled into our incredible performing arts hall and now, fittingly, bears his name.

Bryan’s family have also had a long association with the School.  His son James attended as a pupil and his sister, whose married name was Brenda Blake, taught here for over thirty years becoming the first Head of the Pre Prep.  His daughter, Jo Copping, also taught in the Pre Prep for over twenty years and her sons Dominic and Jaspar attended as pupils.  In true Read family style, Jo continues to volunteer at the School, making many of the wonderful costumes for productions.  When Richard Beck, the Chairman of Governors who succeeded Bryan, gave a speech in his honour at the opening of the Read Hall he said that we must also not forget the other member of the Read family who, despite not having been a pupil, a Governor or a member of staff, also had ‘a long and devoted association with the School’, Bryan’s wife Sheila.  Before her death two years ago, as Richard noted, she must have listened to more Prize Day speeches than any other person in the history of the School.

Bryan and Sheila remained lifelong supporters of Town Close, attending performances and events, both being familiar and friendly faces around the School.

Benita Ogg, current Bursar, recalled: “When I first came into post, Bryan would regularly pop in to see how I was getting on and would always ring me or send an email when the School’s annual financial results were published.  This sort of quiet thoughtfulness characterised both he and Sheila. It was the greatest privilege to accompany David Bolton (another successor Chairman of Governors) to visit Bryan and tell him that the School had bought the Ipswich Road site it had leased for over 80 years.  Bryan was absolutely delighted and quite overcome.  I am so pleased he lived to see that day.  Unfortunately, I never got to hear him play his piano accordion, a love for which apparently started when a member of the Town Close House Accordion Band!”

Bryan accomplished a huge amount during his life and was an avid supporter of so much in and around Norfolk and Norwich for which he was rightly honoured but The Town Close community will be forever grateful for all that he did over his long life on behalf of the School he clearly loved.  He will be greatly missed.

We are indebted to Mr Richard Beck (Chairman of Governors 2004 – 2012) for supplying much of this information and many of the words. 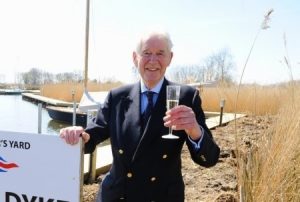